Long considered an American pastime, cheerleading is recognized the world over as a "spirit sport", consisting of highly coordinated gymnastic routines and crowd encouragement.

Organized cheerleading began in the latter half of the nineteenth century as an all-male activity, where intercollegiate American football games inspired students to write and yell cheers to support their team. On Novemeber 2nd, 1898, University of Minnesota medical student Johnny Campbell, after being influenced by the Princeton cheers passed on by Thomas Peebles, had used a megaphone to rally an entire crowd to cheer for his Minnesota football team on the field, making him the very first cheerleader in history. By the 1920s, women started to cheer alongside men and eventually joined in large numbers when college-aged men were sent off to fight in World War II. Cheerleading eventually became a staple of school athletic programs across the US in the 1960s, and in time rose to new heights of popularity with the advent of "all star" competitive cheerleading.[1][2]

In Japan, cheerleading came to prominence during the rise of American competitive cheerleading in the 1980s. Although encouragement activities already existed in the form of cheer squads (see below) and baton twirling, Japanese "cheer girls" were largely inspired by America's cheerleading scene during the mid-1970s. Japan would later air Go Go! Cheergirl, its first cheerleader-themed drama series in 1980-81, which would help raise the country's popularity of cheerleading during the decade. By 1988, the Foundation of Japan Cheerleading Association would hold its first national cheer tournament. At present, cheerleaders in Japan, like many countries including the US, perform both at the competitive level, as well as the traditional "team support" role found in schools and communities.[3][4]

People in Japan are more likely to use the pseudo-English term "cheer girl" when describing cheerleaders. Although Go Go! Cheergirl may have first embedded the idea that cheerleaders are mainly female, it is also likely that the term had helped differentiate cheerleaders from the all-male core of a cheer squad.[5] However, Japanese cheerleading teams will use the proper English word "cheerleaders" to describe themselves, and popular media is increasingly highlighting the incorrect but common usage of "cheer girl", such as the film Cheer Dan and the light novel Cheers!.[6]

Various jumps can be performed individually or by a flyer performing a basket toss while in a stunt group (see below).

The following are roles handled by members of a cheer team when performing stunts. A stunt group will usually consist of one flyer, a backspot (plus an optional frontspot), and two bases.[15][16]

Although cheerleading does not necessarily have to involve stunts, they are nevertheless used frequently in performances. Even a basic stunt, such as lifting an individual from the ground and holding them as they stand in the air, requires great effort and coordination among the stunt group members. 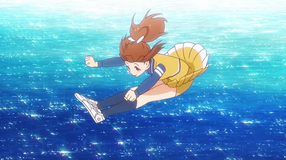 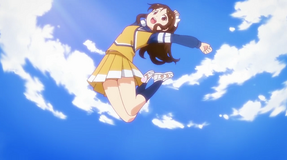 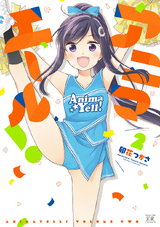 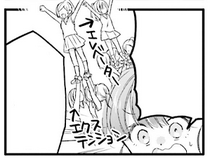 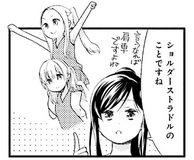 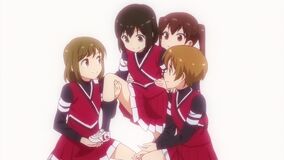 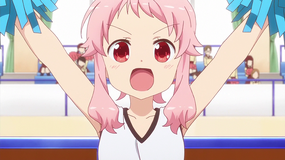 High V
Add a photo to this gallery

Retrieved from "https://anima-yell.fandom.com/wiki/Glossary?oldid=1041"
Community content is available under CC-BY-SA unless otherwise noted.